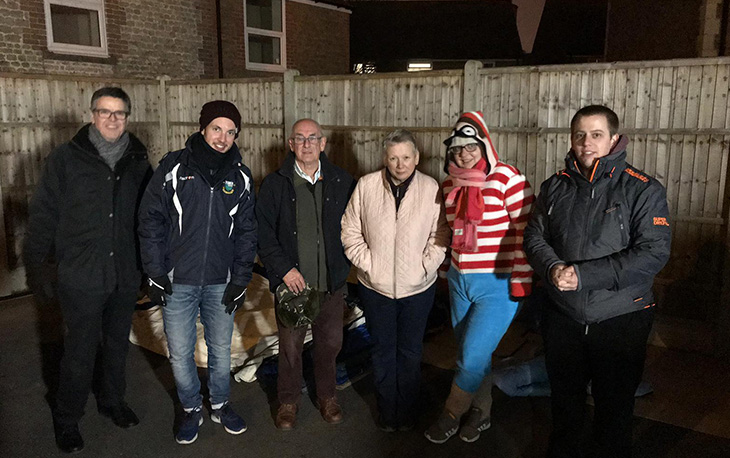 Caring members of F Curtis and Son Funeral Directors in Warminster braved a bitterly cold wind during a night sleeping out to raise funds for homeless people and the heating fund for their local church.

Funeral Director Damian Eyres and Funeral Arrangers Sarah Hughes and Vanessa Fry were joined by family members and the vicar of St John’s Church, the Rev David Prescott, for their 12-hour stint.

Sarah explained: “Throughout December and January we collected blankets and bedding from our generous community to support homeless people.

“We thought spending a night getting some understanding of their life would be a great way to raise awareness of homelessness.

“It was certainly an eye-opener to what homeless people deal with. It was quite a mild night although there was a bitterly cold wind. I didn’t get much sleep and was counting down the minutes between the chimes of the church bell.

“At least we had a mug of warm soup which my mum made to drink before trying to settle and, at the end, we got to go home to sleep in our warm beds.”

The team have already raised more than £600 to be divided between St John’s Church’s heating and roofing fund and and Alabaré, a charity which supports homeless and vulnerable people

The sleep-out took place from 6pm on Friday 22 February until 6am on 23 February in the car park of the funeral home in Portway.

Have you found what you are looking for today?